Innovation is not a Space

Innovation is not a Space 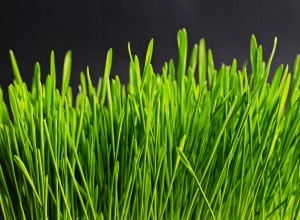 I’m increasingly seeing clients with innovation spaces and I’m seeing more of them on social media/news channels where companies are outfitting office spaces with fun decorations and repurposed objects (e.g. tuk-tuks as meeting spaces). This concept of an innovation space has been introduced to change the way that employees generate solutions.

The problem with this is a belief that innovation is a space, i.e. create a non-conformist space and label it as your innovation. Then expect magic to happen. But the magic doesn’t happen.

Here’s the truth, you can introduce innovation in a windy portakabin. It’s not comfortable (and that breaks one of the rules I’ll mention later), but it can be done.

You don’t need fake grass carpets, slinky springs, koosh balls, nerf guns or whatever else is hip at the time your innovation designers come into your organisation. Those things could help, but they don’t guarantee innovation.

Where does innovation come from?

Innovation comes from within the collective mind. No, I’m not getting all new-age here, I referring to the effect you achieve when you put people in a room together, remove some boundaries, give them a task and prompt with them with different perspectives. Depending on the culture of the organisation, that can sometimes be all it takes. More likely, it will require more.

Every organisation has a culture, if not several cultures and subcultures. Without getting into the details and studies of cultures, we can think of the culture that is applied from the top-down and the culture that is the collection of the behaviours of each individual in the organisation. Both of these perspectives affect each other and not necessarily in a good way.

If your organisation is very tightly controlling, then innovation will probably occur in workarounds to systems. The innovation will be small and, while it gets the job done for the employees that put it in place, it probably causes issues elsewhere in the organisation, especially downstream in the customer transaction. Instilling a sense of innovation and the ability to execute something different where all tasks are tightly controlled is a massive task. Fake grass carpet is not going to solve that problem.

So think now of a different type of company, e.g. one where people are granted some leeway in how they operate, one where ideas can percolate up the relatively shallow chain of command, one where failures are tolerated if they were part of an agreed experiment, one where funds are available for experiments. Now with that company in mind, do you think the need the fake grass carpet to achieve innovation? No, they don’t, but it may help.

Maslow presented the hierarchy of needs and it’s stood the test of time as easily understandable, simple enough to describe and it makes sense. 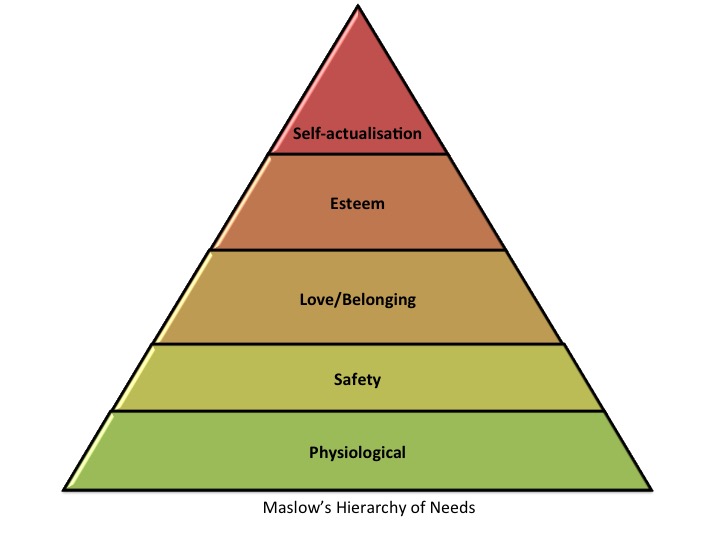 These apply to the individuals in the innovation team.

I’ve seen two ways to read the hierarchy of needs. The first is that the lowest needs to be fulfilled before people can think about the next need up. So from that perspective, it’s about what needs to be provided before you can work your way up the hierarchy. The second is that once a need no longer motivates someone once it’s fulfilled, so they become motivated by the next highest need. We’ll use both of these perspectives.

I’m going to introduce a further set of needs relating to innovation. These take much of the same terminology as in Maslow’s but I’ve changed the order and added in two new levels of need. 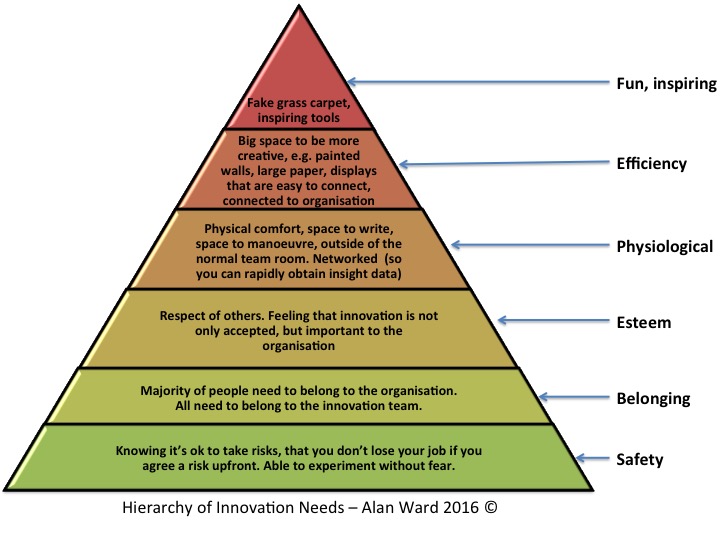 You’ll note that Safety is the most basic need of innovation. Referring back to the perspectives of Maslow’s hierarchy, we can apply the same principles here. If the people don’t feel able to experiment because of fears for their job, you won’t achieve much innovation. This replaces the Physiological need as the lowest level of need in Maslow’s. The Physiological Needs of the individual are still the most basic need for reasons we’ll see later when we combine the hierarchies. The get people motivated to innovate, we need to ensure safety to innovate within the organisation.

Belonging is a necessity otherwise the innovation could be too harsh, too far from the aim of the organisation. I can easily create a team that will innovate and have done some many times, but that doesn’t necessarily mean that the innovations are wanted. To give you an example, for one of my social care clients, the innovation proposals were becoming increasingly outlandish as the responsibility of the innovation process was increasing. In that case, the innovations were to be responsible for an increasing number of financial savings. So we combined ideas from other sectors, e.g. insurance claims, advertising, etc. Some of these were more business decisions with no (or very little) effect on the end users, but more effect on the local authority. Some, in terms of treating social care applications as a process similar to raising an insurance claim, could have had a detrimental effect on end-users, but could have met the savings targets. Fortunately, the team had already been promised a more mixed group of employees rather than purely change consultants. When the front-line workers became involved, further innovations started to develop, partly from their reaction to the previous proposals, partly from their own thoughts. A more complete and relevant set of proposals were then presented, with the originals as a backup in case the second set did not go far enough to achieve the savings.

I’ve seen many a team fail to provide innovation in the first instance because they believe that their thoughts will go unheard. Depending on the organisation and how much time I have, I try two approaches: 1) Develop a process and culture where their voices will be heard 2) Tell them to tell me and I’ll make sure the voices are heard in that instance. Obviously (1) is better longer-term, but (2) can work when there’s little time to focus on the solutions.

Remember the two views of culture? This is where those perspectives come into play. If the organisation doesn’t appear to act according to its own values (assuming those values are positive and nurturing), then the employees will behave in response to that. So, even if you have a core value of empowering employees to innovate, if that isn’t followed through by the board and directors, then the other employees will feel that it’s a waste of time and effort and so not innovate.

Here we see the physiological needs of innovation. Ideally a dedicated room where the team can meet on a regular basis. The room should have certain basics, such as being connected to the corporate network and internet. There’s too much focus on fake grass on the floor. Yes, it’s quirky, but I’ve yet to find evidence that it actually works. I’m more interested in the ability to share information quickly on the walls or display screens.

Innovation can be squashed by bad administration. If you’re in the middle of generating an idea, talking through a complex issue, the last thing you want to do is to go to another room, find a pen and flipchart, drag it back in, to find that someone’s left the room and you’ve forgotten what you were going to say. So for that reason, the efficiency of the room should be considered. Walls that you write on and wipe off are great because it saves time hunting. And the larger space for writing allows more people to get involved. Similarly large screen displays that you can connect to without being on the organisation network, e.g. using a wifi adapter (such as Amazon FireTV, AppleTV or Google Chromecast) are incredibly useful and save a lot of time.

The last category is where we started. It’s the fun and inspiring elements of most creative spaces. That’s bright colours, funny curios, decorations, fake grass, beanbags. If you’re going to go for a space, then these are good, but only do them if you’ve met all the other needs first.

The Hierarchy of Innovation Needs that I’ve introduced are most definitely in addition to Maslow’s, not replacing them. For instance, even if you meet the physiological needs of innovation, but don’t meet the physiological needs of the individuals (e.g. room is too draughty), you’ll still increase your chance of failing to innovate. So if you remember I mentioned that you can innovate in a Portakabin? I find that when Portakabins are used onsite as temporary offices, they’re usually draughty and too cold. It’s the execution or the implementation that’s at fault, not the product. Probably to do with companies hiring the cheapest temporary office accommodation they can find, rather than choosing more insulated options. What this means is that you can innovate in temporary accommodation such as Portakabins but the chances of innovation are reduced since you’re often not meeting basic Physiological needs of the individual. 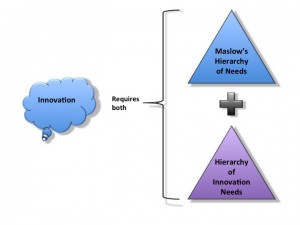 So to increase your chances of real, useful innovation occurring, you need to meet both hierarchies.

There are some needs that are more relevant than funky decorations in your innovation. Consider where innovation comes from and what you want from innovation (new business line, increased savings, closer relationship with customers, etc). Most importantly, consider the culture of your organisation and the behaviour of the people in your organisation. That will influence how many of the needs you will have to fulfil to increase the chances of successful innovation within the company. When looked at from that angle, it’s easier to understand why some companies create either sub-organistions (such as Lockheed’s Skunkworks) or separate, related companies to achieve the innovation without having to tackle the culture of the parent organisation.

This is a first draft. Are there any types of needs that I’ve missed? Or would you have them in a different order? Comment below and let us all know.