The Kano model can operate in reverse: exploring the travel industry

The Kano model can operate in reverse: exploring the travel industry

You may have come across the Kano model before. It’s an analytical technique for understanding what your customers want and, importantly, what they’ve come to expect as required.

I was travelling on a local train last week with a largely empty carriage. I had the choice of seats. I am familiar enough with these carriages to know that there are heating vents in blocks underneath every third row of seats, so I didn’t sit behind one of them. That way my feet would have somewhere to fit.

So I a seat two rows behind.

Then I noticed that my knees didn’t fit. Actually, couldn’t fit. I was seated as far back in the seat as I could go and still my legs could not fit straight in front of me. I had to resort to man-spreading (the shame of it!), not because I wanted to but because simple, basic geometry meant that I wasn’t going to fit in that seat any other way.

Since the carriage was empty, I looked around at the other seats to see if I’d chosen a particular tight space. Unfortunately they were all that size.

I’m pretty average in height, my legs aren’t especially long, so I pity those at 6’5″ who have no chance.

What the train operators have done is increased the number of seats by reducing the space allocated to each seat. This isn’t a new problem, nor is it a new solution. Airlines are famous for reducing the space available to travellers. But it is interesting to many customers transport operators are willing to put on the uncomfortable side of the line. Is it 5%, 10%, 50%?

Now let’s look at the travel experience through the lens afforded to us by the Kano model.

Application of the Kano model

The Kano model depends on asking customers what features they would be happy to have and which features they would be unhappy not to have. You ask the same question for each feature (but separating out the questions). The point being that customers can say they really want something, but wouldn’t complain if it’s not present. Or the converse, where the feature is just expected as part of the product.

Even to the point that they haven’t considered not having the feature. Imagine doors that open automatically in hotels. That could be classed as a delighter in that it makes a difference to the customer’s perception of the product. These are at the top of the chart above the red line. But if you ask if a door is required, then it’s likely to be considered a basic, in that it’s required and expected. These are at the bottom of the chart below the green line.

There is also a performance need running from bottom-left to top-right, in that the better you deliver these features, the happier the customer.

Usually the focus is on delighters becoming basics over time as technology makes it cheaper to deliver those features.

Entertainment on airplanes used to be a delighter. Then it became more standard and has been a basic requirement for a number of years now. We’re seeing a similar transition with wi-fi becoming a basic requirement throughout all stages of travel, whether in taxi, at the airport, on the plane, etc.

However the travel industry also seems to be offering a reverse path of taking features once regarded as basic and turning them into delighter. Unfortunately this path exhibits some discomfort as the basics are provided more cost-effectively each year, until the trend for them reverses.

Let’s consider the local train journey. At some point in the recent past: 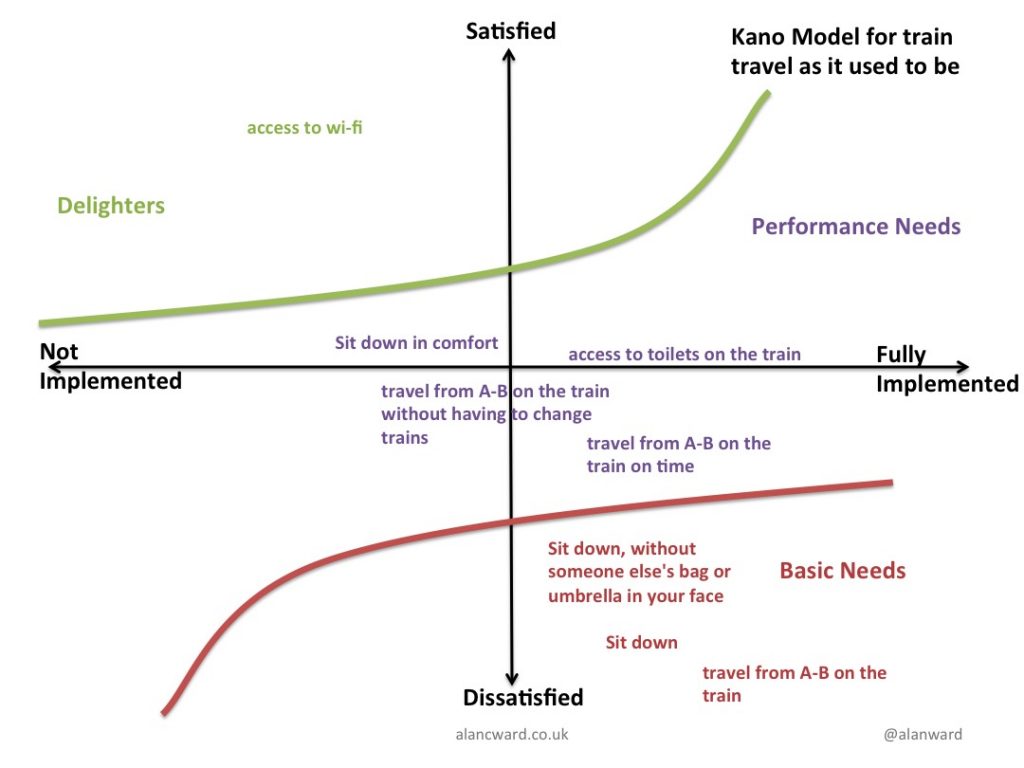 Kano model for train travel a few years ago

Yet, the service that I was provided gave me the impression that

So at some point in the past, being able to sit down in moderate comfort was a basic requirement. This is where it gets interesting, in the eyes of most customers, that requirement still is a basic need. But we’re seeing a disconnect between the customer perspective and the train operator perspective. And that disconnect is increasing with more cohorts or segments of customers as the space per seat is reducing (i.e. more tall people are being made uncomfortable).

We may see a reverse-reverse change, where comfort becomes a delighter yet again. And following that further on, we could see a pendulum effect as features:

A Pendulum effect in the Kano model