Examples of Innovation in The Musical Instrument Industry

Examples of Innovation in The Musical Instrument Industry 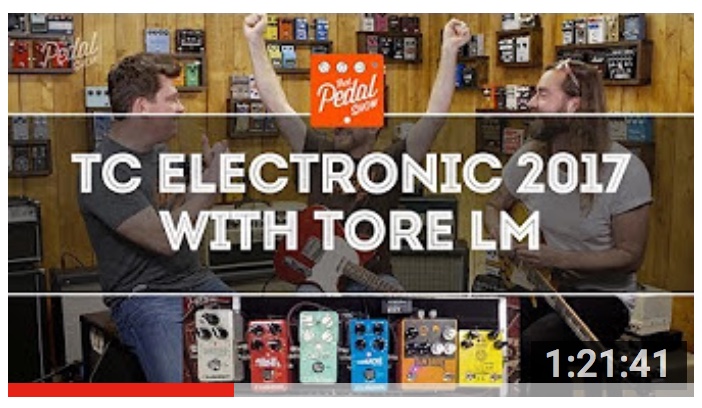 I’ve embedded a video below of an interview on That Pedal Show with Tore from TC Electronic. The video includes several good examples of some parts of the corporation innovation process at TC Electronic. What I like about the video is that it’s a natural conversation. It’s not a presentation of how they’ve innovated, or what their innovation process is such as we normally see with Power Point presentations at conferences. Instead, we get to watch a conversation between the 3 speakers that starts with stories, then progresses onto product demonstration with some further stories and explanations thrown in.

We get to hear Tore’s tales about how he introduced new concepts such as how he developed the Toneprint feature (where the signal to the pedal is passed from phone through guitar pickup) and the mash feature on the newly-released pedals.

I like the idea that he’s innovating by introducing features, even when those features have potential to subtly change the business model. Notice how the presenter on the left mentions that people won’t need as many pedals anymore and he guessed that Tore would have had to go to the board at TC Electronic to gain agreement to proceed with these new features. You can imagine the business case angle there.

We also hear clearly how the ideas and concepts were developed separately from the implementation of those concepts (think of it as separation of ideation from prototyping/development). That’s a good thing.

Just how innovative is the innovation?

TC Electronic have been pushing the boundaries and you can tell from the reaction of the two presenters that the boundaries have well and truly been pushed in this case. To save you from watching all the other episodes, I’ve never seen that reaction in them before. You can hear the first reaction around 21:30 into this video.

From my own experience as a guitarist, I’m now looking at the option of clearing up my own pedal board with a few TC Electronic products. The new features do open up possibilities that weren’t there before.

If this were any industry other than musical instruments, specifically guitar accessories, then I’d probably categorise the changes as just being improvement on existing products. But because guitarists are still mostly using old technology, what I’m seeing in these advances are more innovative than most. The new features are not just a new sound or an extra knob, or more commonly nowadays, an artist-endorsed model.

Guitarists, on the whole, are very resistant to change. We see largely the same technology as we did 60 years ago. There are technology advances but those advances are mostly used to emulate the sound of the 1950s and 1960s. Guitarists aim for the sound of a solid wood guitar, with 6 strings, going through magnetic pickups, on a cable through an amplifier which has valves (or tubes) in them, through to a speaker cabinet featuring inefficient drivers that are incapable of reproducing the sound put into them. Many companies have tried (usually with little success) to change the mindset of  guitarists. We’ve seen carbon-fibre bodies, 7, 8 and 9 strings, baritone necks, different types of pickups, etc. Yet consistently the majority of guitarists aim for the 60 year old recipe because that’s the sound we’ve been trained to recognise as good.

It’s a long video, the clip starts part-way in where he starts to talk about the innovations he’s been involved in.