When is it Innovation?

When is it Innovation? 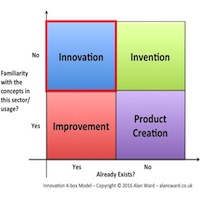 The terms innovation and invention are thrown around with abandon. This is rife in the startup domain where the innovation is often relating to a business model and in ageing corporations where innovation is being used to revitalise the organisation. But when is it innovation? Or could we actually be thinking of invention, improvement or creation instead?

“make changes in something established, especially by introducing new methods, ideas, or products”

We’ll use a 4 box model of the type described in Using Four-Box Models to explore the concept further.

The 4-box Model of New or Improved Ideas 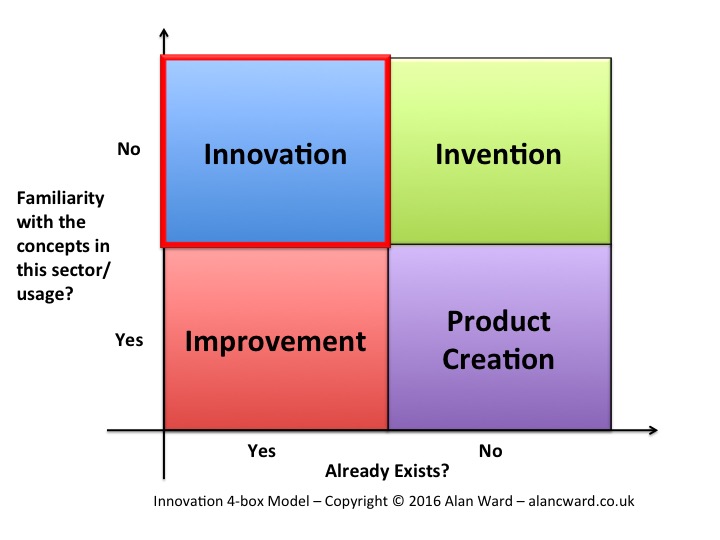 Starting with the definition above, for it to be innovation, we have to be introducing something new (e.g. technology, process, business model, way of working) into an existing business.

So the concept needs to already exist elsewhere, even in the same business if it’s large and disparate enough. The concept also needs not to have been used in this context before. Typically we borrow an idea from one business sector and apply it to another.

If the concept has not existed before (and therefore we couldn’t have experienced it in the sector), then that is invention. We’re creating something from scratch, introducing a new concept into the world, regardless of the sector.

If the concept already exists and is already used in that sector, then we’re not introducing anything new, then we’re improving. This is the problem with the marketing phrase used in commercial spots “new and improved”. How can it be both new AND improved?

A number of times, I’ve been presented with a list of innovations that a client wishes to see introduced to their business. But on looking at the list, the majority of them are just improvements. There’s no ask for anything new or anything radical. These clients are those that typically have a comfort zone, realise they need to change, but are taking the first steps. And the term innovation appears to offer a solution, however there is a price and that’s moving out of your comfort zone. Innovation can make your life easier, but it’s unlikely to be a comfortable journey getting there. In comparison, improvements offer the warmth of a known destination and an easy journey to arrive at that destination.

The remaining box is the most awkward one for me. I change my mind between whether it should be blank (as in non-applicable) or whether there is a process active in the space represented by that box. I’ll relate it to development of cars.

Writing a book would also fit into product creation. It could be argued different if you create a completely new genre for your book’s theme. Even then, the book you’ve written is still only a book at the end of the day. So the product created is a book, but the innovation or invention is the genre. A good example of innovation in genre would be the Pride, Prejudice and Zombies series, mixing classical novels with modern zombie  themes.