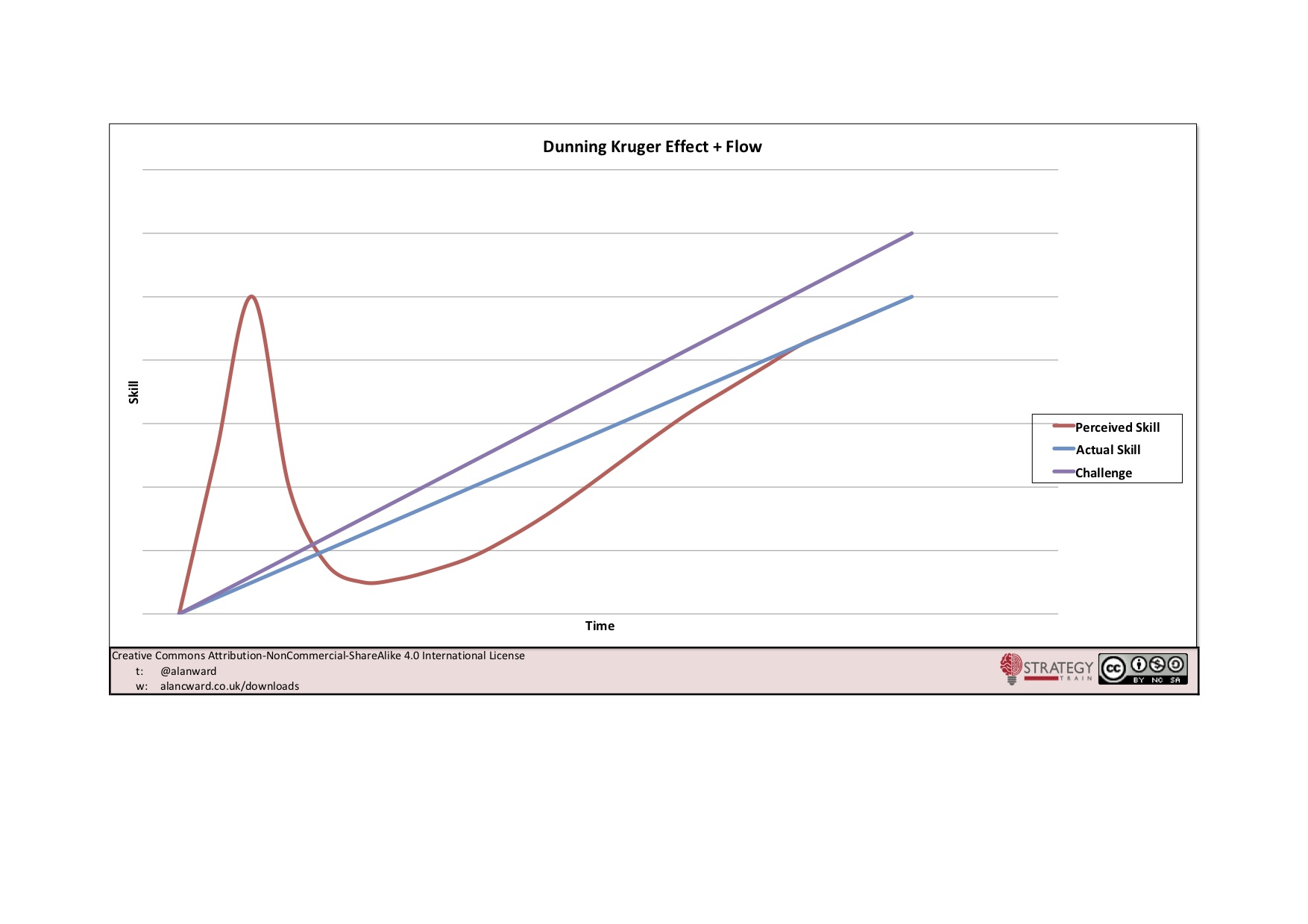 I’ve discussed Dunning Kruger syndrome a number of times, loving the phrase “Peak of Mount Stupid” which we’ve all been on at some point.

A few months ago, I was introduced to Flow by Mihaly Csikszentmihalyi, described succinctly by Chris Bailey.

You may have heard of the Imposter Syndrome, partly known as the Dunning-Kruger Effect. It’s when a person, newly learning a set of skills, believe that they know more than they do or are more capable than they are. Perversely, someone more experienced may view themselves as less capable because they know more of what they don’t know.

Note that the horizontal axis show time, but it’s time applied to learning and experiencing the skill. Time alone doesn’t change the level of the skill.

So I chose a typical motivating level of challenge, where the target is just outside of your grasp, but you can see how you’d get there with support and practice.

The interesting part for me is where the perceived skill is higher than the challenge. In this case, the person is likely to be bored, but since their actual skill is below the level required for the challenge, they’re likely to fail if they apply themselves to the challenge. So we end up with typical responses:

Essentially avoiding the task (including the inherent challenge and the opportunity to improve). We see this response as a shortcut to avoiding the responsibility of having to put the hard-work in to learn.

A worse response still is the one where the challenge is dutifully accepted, but done a completely different way to the industry-standard without reference to safety, risk, etc. I’m not saying that fresh eyes are wrong, but we should blend our new ideas with the current operating environment.

Following the fall from the Peak of Mount Stupid (you can guess where that is on the chart), we see the pit of despair. During that trough, it may make sense to relate the challenges relative to the perceived skill rather than the actual skill. In the chart, I’ve kept the challenges proportional to the actual skill. It’s easy to imagine a possibly better situation for challenges being aligned with the dip, but keeping above it so as to introduce some reality to the student (i.e. showing them that they are better at it than they think they are).